File storage based on ElasticSearch

ElasticWarehouse is a file data storage build on the top of ElasticSearch. It’s an open-source project funded by EffiSoft Poland.

Read and Write Efficiency: ElasticWarehouse is designed to allow a single cluster to work under high read and write load. Files are partitioned and spread over a cluster of machines to allow applications read write and search for files efficiently using power of many machines and not only single one.

Clustering: ElasticWarehouse has an ability to distribute data across multiple nodes for load balancing and efficient read, write and searching,
Horizontal Scalability: By adding more nodes you can elastically and transparently increase the capacity of the cluster without downtime. Simply bring more nodes up and shut down nodes – the system will continue to serve requests,
Fault Tolerant: Don’t need to configure RAID-1 configurations, cluster is fault tolerant thanks to replicas. The loss of any node in the cluster won’t affect the stability of the cluster. Number of fault tolerance nodes can be increased by increasing number of replicas.

Custom endpoints: ElasticWarehouse has custom REST API endpoints and custom JSON API. In advanced mode you can always send requests directly to ElasticSearch lower layer,
Full Text Search: One of the biggest features of ElasticWarehouse cluster is the ability to not only return files, but also files that contain words that are related or relevant to the search keywords. List of all available extensions is here: http://tika.apache.org/1.7/formats.html
Geosearch: Has ability to perform geo searching for documents with GEO information (like photos)
Versioning: Each file modification has it’s own, unique version number
Shell tools: you can access to files stored in ElasticWarehouse cluster like to regular filesystem 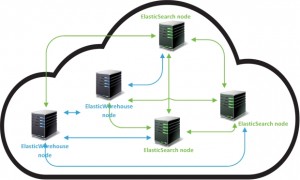 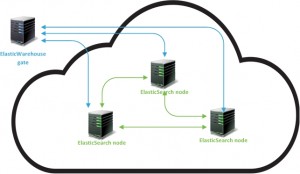 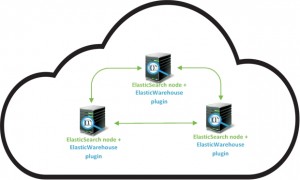